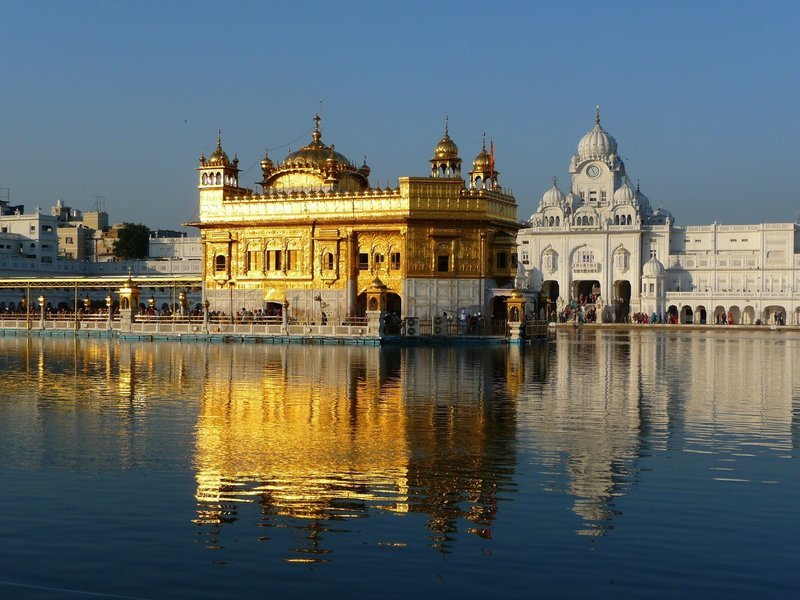 The Golden Temple also known as Harmandir Sahib "Abode of God" or Darbar Sahib is a Gurudwara located in City of Amritsar. The Golden Temple is spiritually the most significant shrine in Sikhism. The temple is earthly representation of the Milk Ocean of Vishnu/Hari. The word Harmandir means Hari's House. The Golden Temple is an open house of worship for all people, from all walks of life and faiths. The complex is a collection of buildings around the sanctum and the pool. Additional buildings include a clock tower, the offices of the Gurdwara Committee, a Museum and langar – a free Sikh community–run kitchen that serves a simple vegetarian meal to all visitors without discrimination. Over 100,000 people visit the holy shrine daily for worship. The Gurdwara complex has been nominated as a UNESCO World Heritage Site

The Jallianwala Bagh massacre is a place where Crowd of nonviolent protesters, along with Baisakhi pilgrims, who had gathered in Jallianwala Bagh to protest against the arrest of pro-Indian independence leaders Dr. Saifuddin Kitchlew and Dr. Satya Pal in response to which massive shootout took place by Britishers.

Wagah Border is a village and union council located in Lahore Punjab Pakistan. The border crossing draws its name from Wahga village, near which the Radcliffe Line, the boundary demarcation line dividing India and Pakistan upon the Partition of British India, was drawn. The Town is famous for the "Wagah Border Ceremony" and also serves as a good transit terminal and a railway station between Pakistan & India.

Day 3:- Friday
Good Morning....!! Wake up and have Breakfast in Hotel
by 10. am Leave for Amritsar culture and followed to Wagha Border in the evening back to Hotel or Can Visit Golden temple in Night
Have Langar in Golden temple
Meal:- Breakfast & Dinner
Lunch TTMM

Why are we Traveling in Ac Class and Not Sleeper Class?
Train to Amritsar takes 28hours so we want you all to be fresh and safe
3tier Ac gives us a good option

Can we opt for Sleeper Class?
Yes you can the Difference in the ticket price will be refunded (Apporx 2000 for both ways)