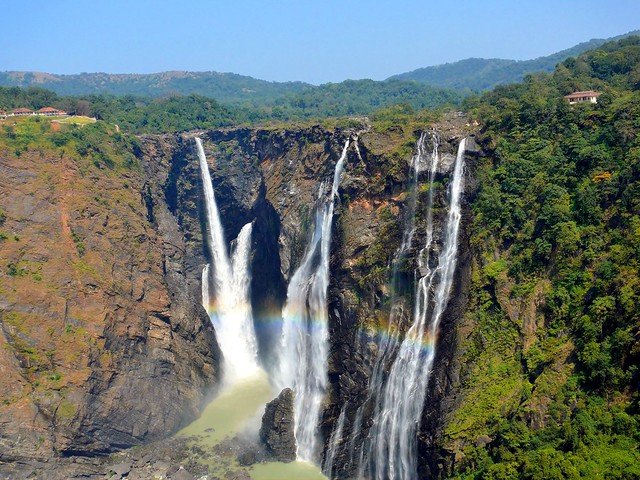 Jog Falls, Gerosoppa Falls, or Joga Falls is the second-highest plunge waterfall in India, Located in Sagara taluk, these segmented falls are a major tourist attraction. They are also called Gersoppa Falls and Jogada Gundi.
It is located on the Shimoga and Uttara Kannada district border.
Jog Falls is created by the Sharavathi River dropping 253 m (830 ft), making it the second-highest plunge waterfall in India after the Nohkalikai Falls with a drop of 335 m (1100 ft) in Meghalaya.

.
Murdeshwara Temple
Murudeshwara is a town in the Bhatkal Taluk of Uttara Kannada district in the state of Karnataka, India. “Murudeshwara” is another name of the Hindu god Shiva. Famous for the world’s second-tallest Shiva statue, Murudeshwara beach town lies on the coast of the Arabian Sea and is also famous for the Murudeshwara Temple. The nearest airport to Murudeshwar is Mangalore International Airport at a distance of 160 kilometres. Murudeshwar has a railway station on the Konkan railway route.

Always fascinated by seeing the tallest Lord Shiva statue in South Indian Movies,
Ever wanted to visit the biggest waterfall in India, come, Join us, Explore Murudeshwar and Jog Falls.

Day1: Saturday
Get down at Kumta by 04.30 AM,
Enjoy Early Morning Photosession on Station
05.00 am Travel to Jog falls by Private Vehicle

Identity proof (must)
Some ready to eat food. Plum cakes, Biscuits etc.(optional)
A bottle of water (at least 2 Ltrs) Compulsory
TORCH with extra batteries Cap, etc.
Medicine those if u require usually (Optional)
Camera(Optional)
A good walking shoes, extra pair of floaters, extra clothes.
A haversack to put in all the things to be carried so that one has ones hands free while trekking.
Pleases do not carry sling bags or Jholas.
Please avoid wearing Gold and other ornaments.

Rains are expected, so pack your bags accordingly to save them from getting wet. Double pack your valuables in plastic bags.